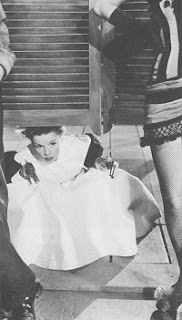 No copyright breach intended.
I didn't think there was a musical film of the forties and fifties that I hadn't seen but the other evening I watched "The Harvey Girls with Judy Garland and a very young Angela Lansbury. Now as a movie it wasn't one of the greats except for the romantic costumes and the famous "Atcheson, Topeka and the Santa Fe" sequence but it was based on and dedicated to the real Harvey Girls. I knew nothing about them so trusty Google found me these links. The brain child of a man called Fred Harvey to provide food for travellers on trains in the newly expanding country Harvey Girls Railroad Museum
Apparently they tamed the Wild West. Fascinating stuff.
Posted by Pat at 9:25 am

As you say, fascinating stuff.
Some of those oldies especially the black & whites are the best though aren't they? My daughter is an avid fan of Doris Day - she's got most of her films on video.
Love the picture of your mum in the last post. Lovely to see someone smiling in those photos which were usually very sombre. She looks like she was certainly enjoying her life.