is that it is bumpy!!!! Well the one I used was. This is a continuation of my TIF piece. Leave now if you can't stand to see a woman in pain.

I had decided that the way I wanted to represent the Queen and her endless round of handshakes was by a string of pearls. Pearls for her favourite jewellery and also to represent the white gloves she often wears. When I came to add the pearls they wouldn't lie flat on the lace (surprise!)and after several aborted attempts I came to the conclusion that ever pearl had to be put on separately and then threaded back through the others to make it stay in place and the lace was stiff because of the painting.(Forgot to mention the layer of foil that I put there in an effort to keep in with the colour challenge.) Well all I can say is, if the Queen has suffered, as she must have done on occasion, from over firm hadshakes, as much as I did putting on these beads it is a true representation of her dedication that I was trying to express!!! 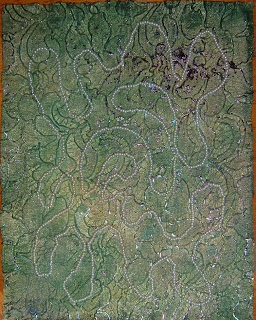 Life then became a little easier, to represent the never ending line of people I wanted to represent every race, colour of politics and creed that the Queen has met.
So I made some bead soup!! 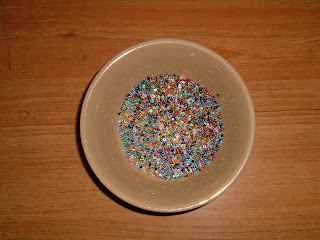 and from this I made a LONG string of beads which I couched down against the line of pearls. 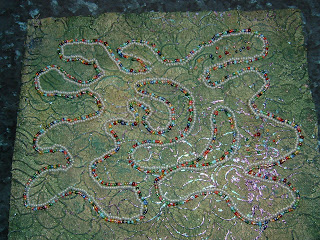 Wasn't quite happy so scattered pearls inside of the unbroken line to represent the press,police, ladies in waiting, organisers...all the support staff.

When I looked at it the colours weren't working, (during the next bit I became so engrossed with the problem I forgot to photograph all the steps) not giving me what I wanted so I decided I needed at frame. I chose some purple material, obviously to represent royalty and also to tie it back into the TIF colour challenge. The beads round the edge were representative of the honour guards, Trooping of the Colour etc.
With the border round it, it still wasn't quite right so I reached for my beloved Treasure Gold and rubbed it into the areas outside the unbroken line. This served to highlight the line and I felt I had brought the piece to a point where I could do no more. 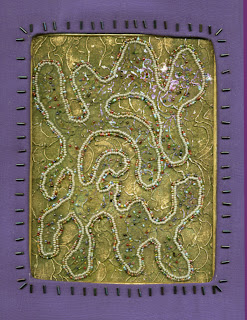 What would be lovely is to put it into one of those very deep, very ornate gold frame---but part of this challenge is supposed to be about stash reduction and I don't have one to hand so ........
this is Paint Shop Pro cheat. 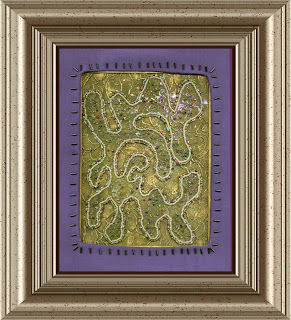 I can't say I am in love with the piece but it the first time I have taken an abstract idea and turned it into a piece of work so in that respect I am pleased.
Posted by Pat at 8:24 pm

Email ThisBlogThis!Share to TwitterShare to FacebookShare to Pinterest
Labels: TIF

Great description and blend of the concept and color aspects of the challenge. It is a very interesting piece. Very abstract - to me anyway- representation of the concept. I like it very much.

Congratulations! I think the piece turned out very nice!

I like the way that the Treasure gold makes the lace look like two different pieces of fabric - a darker green piece appliqued onto a lighter green piece.

Thanks for you journey of discovery.

Wonderful! I just love what you have done in representing your admiration in this abstract way. I would really like to see this in real life, especially with your use of the gold highlights. Using pearls to represent the Queen herself was inspired, as was bead soup for everyone else. Perfect!
Jocelyn

You'll feel much better about it once you get a little distance from all the work involved. *S*

It's fascinating to see how it developed, and it expresses what you wanted to say perfectly.

You're right about the frame! I wonder whether we'll better about these pieces when we've a few more 'under our belts'?

I like the piece and the thought process behind it Pat.

this is truly beautiful and I like the way you have got your message across - pearls and bead soup - marvellous imagery!

I think this turned out very well - it was my first time to turn an abstract thought into a piece of work too - instead of working through it like you did, i kept ditching my ideas and starting again. I think you did better! I like the meanings behind the beads and pearls - nice image

I quite often feel that way about a piece, put it away for a day, 2 or even months before I look at it again and think well, that's an interesting piece.

Anyway, I think this is an absolutely wonderful peice with all the adapted symbolism which is entirely personal to you.

This is great Pat. The frame works well too. As ever your creative thought processes are inspiring. Now I must get on with mine!

Wonderful Pat. You have really worked your way through this one and its turned out rather special. You need to frame it for real now.

Lovely interpretation of the concept ,Pat. The beading works really well with the BG

Hello Pat, you can use a photo of a bag. I did want to send you a mail back but it said, noreply. I'll come back to visit and see more of your work.

I LOVE the piece! And also your darling sense of humor! This is fun to see, and also fun to read your posts. If the queen doesn't grant you an audience to personally congratulate you, then you should draw a moustache on Chris Levine's picture (just kidding...God Save The Queen. . .)!

I think it's a very clever idea there Pat. Very effective.

Hi Pat - what a great post! I really enjoyed your humour as much as hearing about the process you went through (and the adaptations you had to make along the way). I think the finished piece is terrific and very worthy of a nice gilded frame!!