Sharon has been reminiscing about a holiday in Whitby in the north east of England. Being a mixed media artist she has some good pictures. She has a beautiful photgraph of Rievaulx Abbey
This is a photograph I took when we visited some years ago, someone from English Heritage, with great imagination, had placed this figure of a monk in the grounds, it had no face it was just the shape of a figure draped in a monks habit, it stood under the trees just "watching". Very effective and spine tingly! 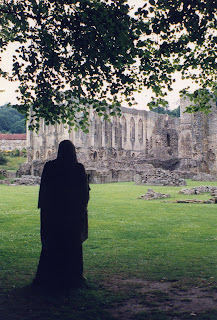 This is a page I did in an altered book, the background of the "chapel" is a digitally altered photograph of some of the wonderful arches of the ruins. 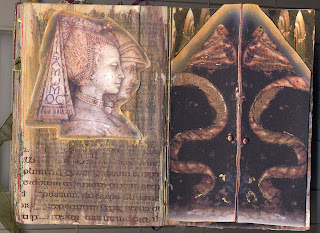 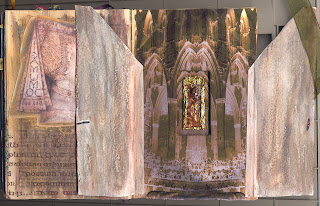 Thanks for the memory jog Sharon.
Posted by Pat at 8:12 am

Those pages are fantastic.

Hi Pat
So glad you liked the post, I was totally captivated by the place, I loved everything about it.
Your altered book pages are super, I was only just commenting on Ro's blog theat I so admire this style of working, and would love to have ago, but I think I'd freeze being faced with a page of text. It needs to be done sympathetically, I think, as you've done, with the alteration matching the style of the original book.
I was very inspired by Holy Island , maybe I'll find the right book and start there!

Pat,
I'm pleased you enjoyed the afternoon. Good luck with stitching on canvas - I look forward to seeing the results!
Gina x