In this months issue of Stitch there is an article on making fairy shoes by Annette Emms. A couple of years ago she wrote a tutorial on Workshop on the Web at the time two friends of mine were performing in a musical play about the two little girls who claimed to have actually taken photographs of fairies, you can see the pictures and the story of the Cottingley Fairies here
This is one of the pairs I made. 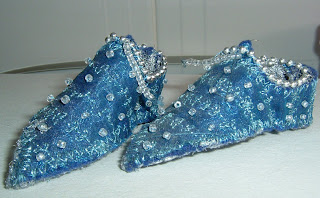 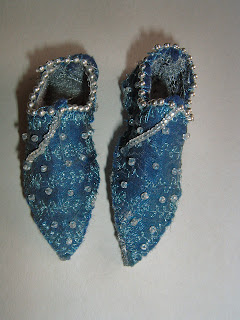 Sharon Boggon is devising a new challlenge for 2008. I have so enjoyed the Take a Stitch Tuesday (apart from Oyster stitich and chain braid!!!!) and the new one sounds as though it will fit in with the things I have been promising myself for next year. She has called it Take it Further and you can find the details here
Take it Further
It will be just once a month so should be easier to keep pace.
Posted by Pat at 8:04 am

These are absolutely lovely Pat. Unbelievably, I love anything fairy like. Would love to make a pair of these but not sure if I have the patience

Pat, your shoes are absolutely lovely. At the time you made those, I was given a pair, which you can see at http://aufildujardin.blogspot.com/

These are really lovely. These fairy shoes are also on my "to do" list. It's nice to imagine the fairy that would wear these.