By the law of *"!! we have just arranged to have out living room and staircase etc decorated and carpeted, so what happens???? Last Friday the television died. Admitted it has been on the blink for a while,(people don't have purple skin do they???) but did it have to chose just now and now in another month or so? Monday DH dropped his pre-shave bottle into the washbasin .....new washbasin required immediately!!!(Happily it was his turn I broke the last one dropping a heavy glass soap dish in it!!) Same day I started a drippy cold. Another drippy cold!!!!. Tuesday feeling much better I set out for a long awaited playday with some friends from the EG We were going to workshop an article by Kelly Rae Roberts published in Cloth Paper and Scissors. Apart from my drip, which worsened during the day, we had a great time, thanks girls, I was right outside my comfort zone with both with the painting and the size I chose. I don't usually do anything bigger that A4, this time the canvas was about
20" x 14". 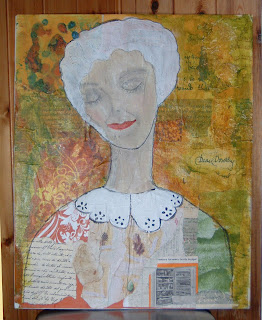 It really looks better here than it really is, I rushed dying the background (there's a novelty) and I missed out a step before painting(there's a novelty) and I have cheated with a charcoal pencil instead of using a paint brush (open eyes totally defeated me)but I really am delighted with the overall effect and I have her standing next to the wonderful portrait of the Queen which I tore out of the magazine.(I thought they would like each other's company)
This is a close up 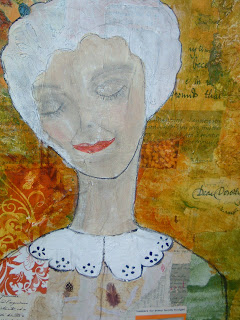 I wish I had thought to take my camera so I could show what they others did...next time!
Wednesday was golf, and this is the card I have made for our new Lady Captain who drives in tomorrow. 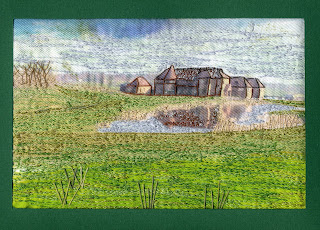 inspired by Carol Naylor (see previous post)I printed a picture of our golf club onto cotton and then machined into it. I finished it off with a little hand stitching to give it some added depth. I also used this technique for a Calendar Girl card but more of that later and just to prove that I haven't been slacking I have been working on something for EG which will be revealed later, as it is for the area day in June!
New television arrived yesterday, a 42" plasma, the picture is incedible and I just can't wait for the NFL season to start!! Yes I can because it's not until September but boy, is it going to be good!. I watched the musical "The Producers" (one of my favourites) on DVD last night, it was nearly as good as being in the cinema.
Posted by Pat at 6:27 pm

I like the canvas Pat and it is always a challenge when we decide to work on a different size isn't it.

A very serene looking lady, she deserves to be sitting next to the Queen.
I hope your new Captain appreciated her card. Is it a scene that she would recognise?