Sharon posted the new TIF challenge for February. The colour scheme is an interesting one

but the concept "What are you old enough to remember?" occupied my mind for most of yesterday evening.This may be, of course that at my age there is quite a bit to go on.

I realised that what Sharon was talking about were things that have been superseded by technological advances, or objects that have disappeared all together but first I sat and tried to think of my earliest memory and that was when I disappeared into the past for hours.

I was born in 1941 in Barrow in Furness which at that time was in Lancashire. My earliest datable memory was the birth of my brother in November 1945.but some of these memories may date from before that. When I was about two we moved to Ulpha in the Duddon Valley where my mother ran the Travellers Rest while my father was a mechanic in the RAF. All my earliest memories therefore belong to Ulpha. I will list them just as they came to me.

Sunshine and male voices singing, I have always thought they were Polish soldiers who were billeted in the hall further down the hill,as that is what I remember being told. They may well have been detainees.

The hill, still known as Travellers Rest Hill though the TR is now appartments I believe. You can see from this photgraph how steep it is and on more that one occasion I can remember a lorry in the yard. 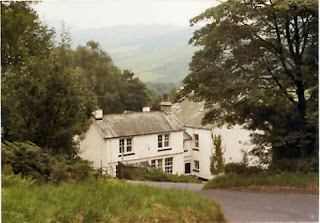 I remember the swing fixed on the branch of a tree, a pet lamb we had, called Larry of course, listening to Listen with Mother on the radio and another programme which was called "Music and Movement" I think, "Find a space and we'll begin". As well as the lamb there were bantam hens and pigs, a horrid memory this, of pigs squealing at slaughter time. There was the snow house we had, must have been the winter of 1947, we had an old piece of carpet to sit on so our bottoms wouldn't get cold. I broke my sisters tooth when she was teaching me to skim stones and there was the monkey puzzle tree which we used to hide under, I visited a few years back and it was still there. 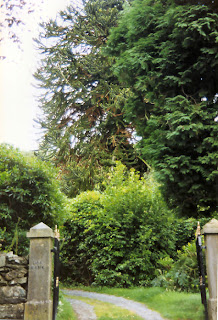 There was old Joe Yoodle (yes that is a real name) who wore corduroy trousers and big boots which I would stand on and he would hold my hands and walk me round the back bar room.
I went to the tiny school, only 15 children in the whole school and when I was the youngest they used to turn my table upside down so that I could have a rest in the afternoon, the teachers voice would lull me to sleep.(Used to affect me later in life in things like Maths and Physics!!!)
This is the school building (with ugly addition) it is now a house. 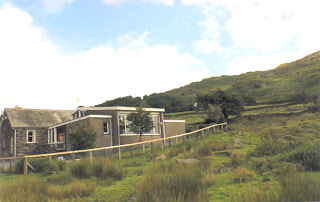 But the best memory of all was my "house". At the bottom of the hill there is a field which leads down to the River Duddon, over a dry stone wall like this 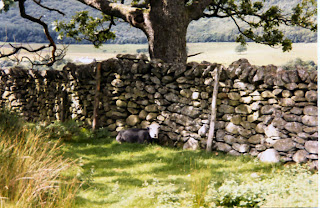 , these wall are wonderful and many have little gardens growing on them like this 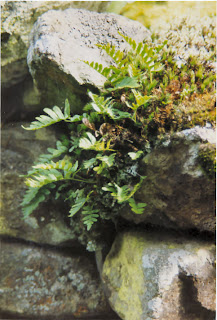 and in the middle of the field is my "house" where I played, by myself, for hours, and hours. 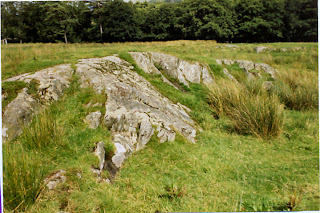 What do you mean it's a pile of rocks!
This is what I saw. 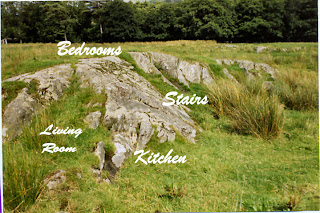 Thank you Sharon for giving me such a wonderful evening. I have a list of objects too but that is for another day.
Posted by Pat at 2:38 pm

Thanks for the journey Pat--great memories and I can see your "home" clearly--maybe it's the age thing.

Ahh! I enjoyed strolling down Memory Lane with you. I had a 'hous' like that it my Nan's 'field' but I had a friend called Gill to play there with me. We had horses (invisible ones) that we rode all day. Not sure why Gill was always the Princess and I was the Prince but ohh! the fun we had.

this could have been writen by my sister Marien, her memories are also so very vivid.

Those are beautiful memories; thanks for sharing. I, too, have been thinking more about people and occasions as opposed to things. Possibly because the color palette reminds me of my grandfather who passed away a few years ago.

Pat, that was wonderful - you made me feel like I was there with you :)

that is beautiful, Pat. You grew up so close to where I'm living now (Kendal). I'm glad the monkey puzzle was still there. Thanks for commenting on my blog.