.....I have long said that February may have the least number of days but is the longest months.  This tear with enforced idleness and the heaviest grey days  you can imagine it is certainly living up to expectations.

1Year of  Stitiches continues and is keeping me sane.
Something occurred to me toda, it wasn't just that the piece had taken an autobiographical turn.  I was reading a piece on Terry Pratchett   and I realised that the mountains in the middle, which are definitely not the shape of my Lakeland hills, could very well be the Ramtops   and this little world might just resemble the Discworld.  Food for thought for the future. 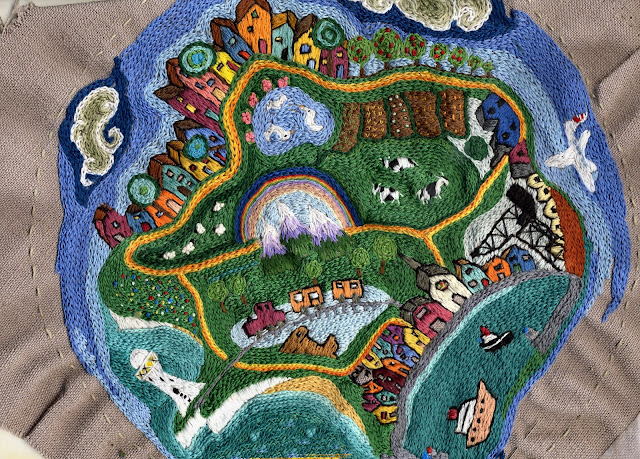 The train is now crossing Morecambe Bay on the Levens Viaduct. There is a tug in the harbour.  Memories of  the excitment of being taken to see the launch Oronsay  cruise liner by my grandfather.  Some of the tugs had come down from Glasgow and the only way you can describe them is as bustling about, full of self importance. Important is what there were because the Walney Channel is narrow and at one heart stopping moment it looked as though the ship would carry on and hit the island but the tugs held her. The cruise ship, coming into the harbour, could be the Oronsay but it could also record the wonderful holidays on the two Seabourn cruises we took
I have obscured the bottom middle because I am not quite sure about that section . I just have to fix that, put in a few doors and windows and then the prosect of the border which won't be half so exciting.
I also had time to play with paint, stamps and dies.  Result, this which is a fairly conventional "art journal" page 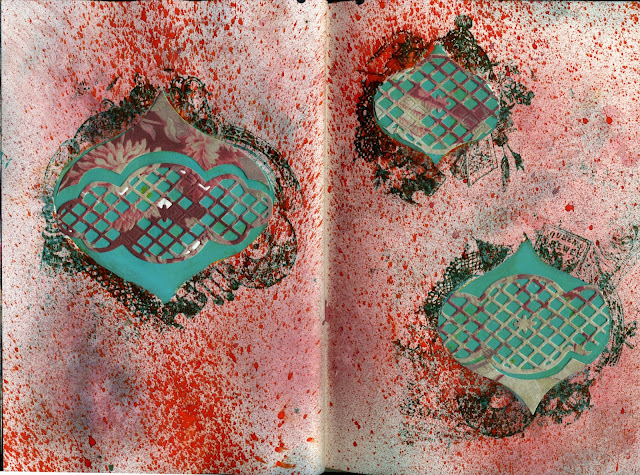 and then this, which was just getting a few things off my chest 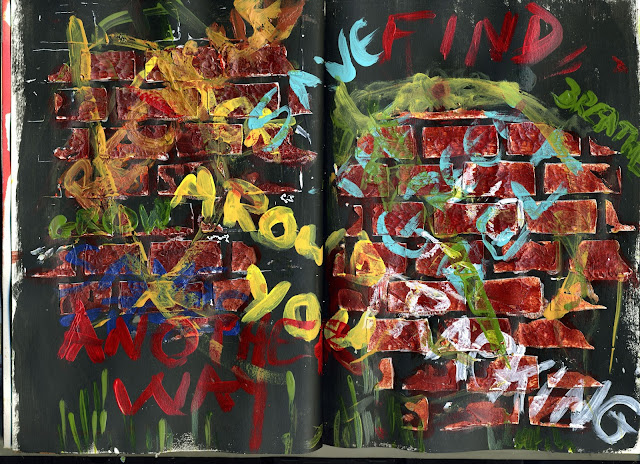 I enjoyed that, never done anything like it before.

Two weeks and apart from bananas, which I came out of hospital craving and a few eggs my household stores have done us proud.  I always stock up for winter as though I still lived at  Ulpha Looking forward to getting behind the wheel this week so that life can resume a bit or normal. Also hoping for a little more warmth and light.
Posted by Pat at 9:44 am