...Thursday evening, a special treat, I went to listen to a talk by Janet Bolton.  I had seen pictures of her work but I was unprepared for haw fascinating it was going to be to here her talk about her life and work.  To see her work close to gave a new understanding on her, often long, process of such beautifully simple images. If you have the chance go listen.  One of the things she said, which I think will stick, was that when you are creating "the only person you need to please is yourself."  A very liberating statement I think.


She also made me feel very homesick as she spoke of the wonderful light of the northern counties, in particular Lancashire our shared home county. I gave myself a treat  to this book Don't you just love those sheep?

Yesterday was not so good. This may end in a rant......you have been warned.   A friend needed transport to a hospital, so off at mid-day off we went, a 25 minute journey.  She received treatment which in the nature of things took a little while and at 5 o'clock we set off home.  FIVE HOURS later we arrived home . The adverse weather had closed the Dartford Bridge and the area gridlocked.  Now here comes the rant, these things happen but they are made far worse by QUEUE JUMPERS  and people who can't obey the simple rule  which says STAY OUT OF THE YELLOW BOX UNTIL YOUR EXIT IS CLEAR.  We need another river crossing FAR AWAY FROM DARTFORD and we need to NOW.
You can take your ear defenders off now.

The NFL season has ended, really enjoyed watching the recording yesterday and the BBC presentation team were great.  Now I have to re-think my entertainment whilst sewing. American Football is great because of all the breaks, though I still hate the ad break after the kick return but I digress.
During the play off season I have occupied my hands with this, 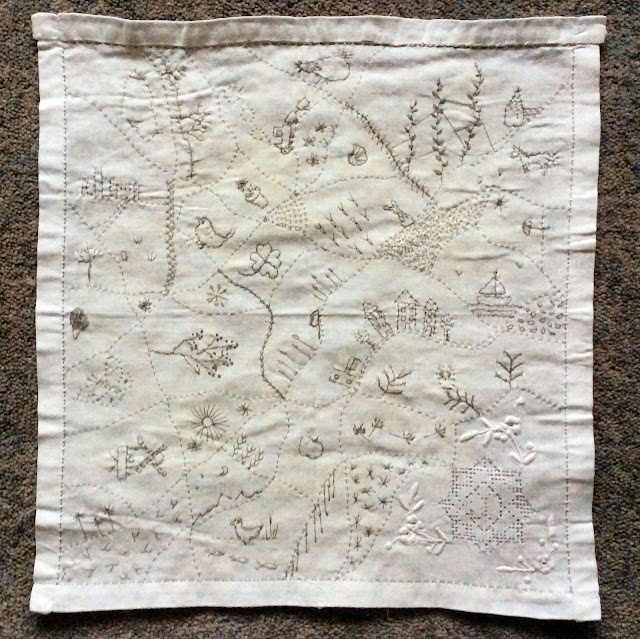 This is a vintage napkin, so about 8" x 8". I used grey sewing cotton which was part of a gift from my friend Gudrun who died last year. The white embroidery was on the cloth. Stream of conciousness stuff really but loosely based on Kent my adopted county.
I spoke of home sickness and these wonderful cloud effects, last week,  made me hanker for a walk own the Coast Road.

Photograph by Jim Raven.
Apparently they are called nacreous clouds
a result of one of the recent storms.
I still think the weather has been worse since we started naming storms.