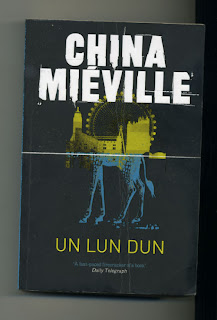 Loaned to me by my a son as being in the "suitable for mother" category it is actually written for children/young adults (which is probably why he thought it was suitable).  It is the best read I have had in a long time.  Exciting and funny it sparks the imagination.
Mr Mieville "has indicated that he plans to write a novel in every genre,[2]"
I understand from my son that I definitely would not like some of his books so I told him to let me know if he, Mieville, ever attempts chick lit .

P.S. I would have been interested in "Supersized Earth" on BBC last night but the "background" music was so loud I couldn't hear what the man was saying.  Why do they do this????