When I was wondering how to proceed,  Jude gave me the advice to "let it do", such advice is precious and I tried to follow it.  I outlined the the main areas of colour and then I started to fill them in just as I would when doodling.  As I worked I realised that there were even more subtle changes of colour so then became a little area too.  I  tried to use a different stitch for each area just as I would make different marks. 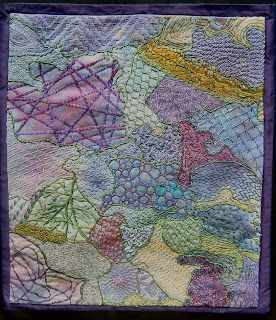 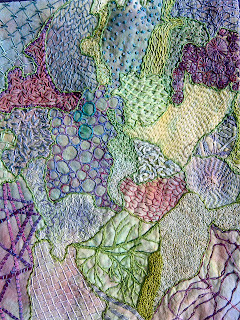 The colours are still not quite right, I've tried indoors and out.  There is much more contrast between the purples and green. For the moment I have turned it into a bag which I will use for the EG South East Area Day Tote challenge, I have made it so that it can be converted into a cushion later on.  It has taken me two months and I have to say I enjoyed every minute.  I would like to try it again sometime, either with stronger colours or  maybe in monochrome.
When I was chosing the material for the backing the salesgirl in John Lewis said "Well, the embroidery's quite RAW!".  I smiled sweetly and said "I think you mean FREE!". Everyone's a critic!!!
Posted by Pat at 5:14 pm

I love it beautiful stitching a very good piece of work

Raw--Free-? me personally I think it is beautiful Pat

Love this - beautiful stitching and colours!

Love your slow cloth. I think the let it be idea has paid off.