I am still managing on my laptop, my hard drive had been corrupted and I am waiting to get it back and, more importantly to see what has been saved.  Fortunately I have a fairly recent backup so hopefully it won't be too bad.

I promised the other part of my lovely day out.

After leaving Margaret I went to the British Museum to re-visit the Dark Ages galleries and also to see a part of the Stafforshire hoard which was on show.  It was great to see these objects just as they had been found, encrusted in mud, with the gold gleaming through.   Sandy has some great pictures on her blog, my camera wasn't up to the task.

From there, a quick visit to the Cloth House for a browse, an eaves drop on a guy who was buying yards of fabric to make a sort of seaside tent  and a very small purchase, just half a metre of this 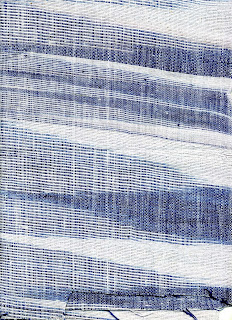 Don't ask, I haven't a clue what I'm going to do with it.
Next port of call was the stangely named Haunch of Venison which I didn't know existed until Margaret  told me.  So pleased she did as I was able to catch the final days of an exhibition by Chiharu Shiota.
This wonderful structure was made of window frames, it made you just want to wander round and gaze up and through, and I so wanted to sit on one of the chairs. 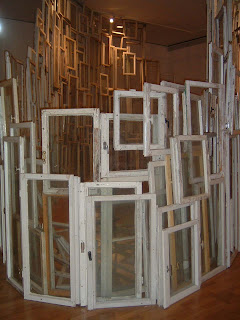 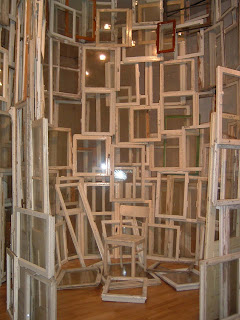 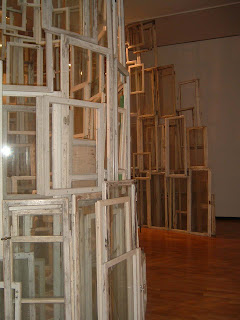 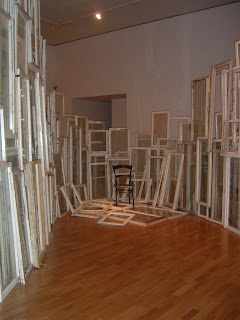 In the next room was something completely different! Click on the photographs for a closer view. 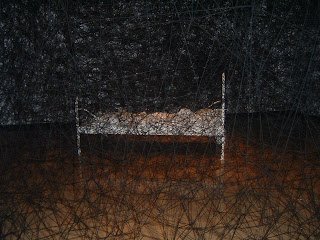 Like something out of Sleeping Beauty, this webbing was all made out of thread, apparently it took two weeks to install, but how one would know where to start I can't imagine.  I took this from inside a web tunnel, it was an amazing feeling.
In the next room were some smaller pieces 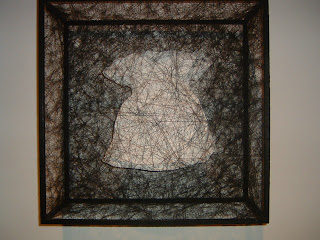 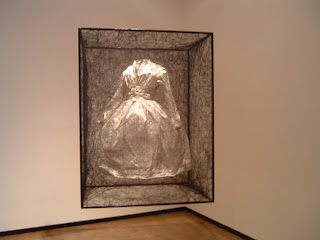 No less amazing in how they had been constructed.
This wasn't all but will have to do for now.
Posted by Pat at 2:47 pm

Gosh Pat - you had a very busy day. The webbing looks very 'creepy' but I love the blue and white fabric!

Wow, I would love to get a better look at the web exhibits! How neat! :D