is no more. For some weeks now this once magnificent animal has been losing his weight and his strength, Yesterday his back legs gave way a few times and today a visit to the vet decided that the time had come when it was kinder to have him put to sleep. 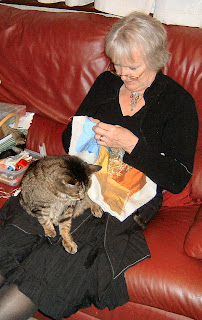 As you see I will miss him. He loved to sit on my knee when I was stitching and was a great scatterer of beads!! The other thing he liked, apart from food, was a sunbeam, He would adjust his position to stay in one until it disappeard.
He first arrived amongst us about 17 years ago by dint of whipping in through the cat flap and finishing off whatever food our then cats had left. He was almost feral, a large cat with a big barrel chest. cock of the walk and probably father to hundreds of kittens!! One day he came in and I noticed that his neck was in a terrible state, almost open to the bone. He was too wild to catch so we hired a trapping cage and warned the vet how wild he was. When I collected him the vet said "Can you put the cream on his neck" I don't think so. So he gave me tablets which I wrapped in chicken and gradually Thomas started to take it out of my hands. Little by little I was able to touch him and then to stoke him, one finger only. By the time his neck was better he had decided that he had found a pretty reasonable billet and so he stayed with us. A great character and companion.
Rest well dear litle friend I hope you find an everlasting sunbeam.
Posted by Pat at 3:17 pm

Email ThisBlogThis!Share to TwitterShare to FacebookShare to Pinterest
Labels: cats

So sorry for your loss.

From the picture it is hard to imagine he was once a feral cat! No doubt he has found a sunbeam in paradise, since you made his life so happy when he was with you. And I'm sure he made you happy too.

I feel so sorry for your lost! Cats are wonderful animals. I have lost two cats before, but I have my little Elsa now, and she lost one eye in a caracident this summer, but she is well now.

Hi!
Sorry for your loss. I'm sure there are plenty of sunbeams with him now.
Susan

Oh, I'm so sorry. You gave him a good life which is a wonderful thing.

Very sad Pat, 17 years is a long time. Take comfort from the fact that he had a much better and longer life with you than he would have done had he still been running wild.

Hi Pat, Pam and I send our condolences, we will miss him when we come round. He seems to have been the Boss for ever, although I can remember him at the start when he was very nervous of strangers, hope Ken's OK,
Tony

Hi, It is very sad but think of all the happy years that he has spent at your place.
I have had my cat 18 years and I know how amazing wise they can be when they have the opportunity to become so old.
I was touched by the way you wrote about him.