How quickly Christmas goes! After all the secret phone calls, shopping sneaked into the house and general preparation it is over in a twinkling. It was worth though.
My wonderful family bowled me over with a new sewing machine, I am particularly impressed with DH who masterminded and executed the whole thing. It is a Bernina 240 he knew this was the one as he had seen me drooling over it when I bought my embellisher. It amused me that in the manual it is not called a sewing "machine" but a sewing "computer". It has 99 instead of 27 stitches and three alphabets. I have had one little play and we are friends already.

It was my son's 40th Birthday on Boxing Day and I can now reveal what was keeping me quiet in the run up to Christmas. I have wanted to make him something for some time, having made the hussif for my daughter. 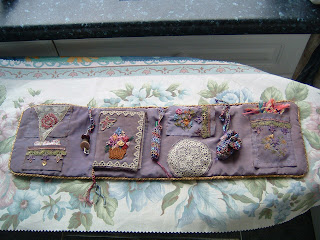 As per usual I forgot to photograph all the stages, these are the embellishments for the lid and the panels which I made on Romeo vanishing fabric. 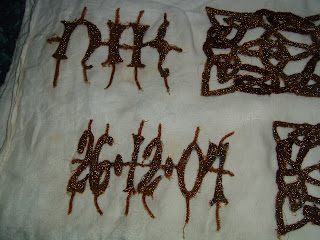 This is the front of the box 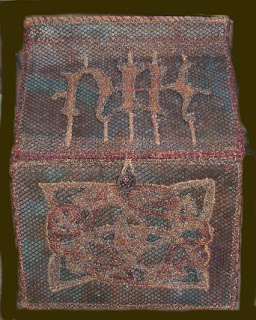 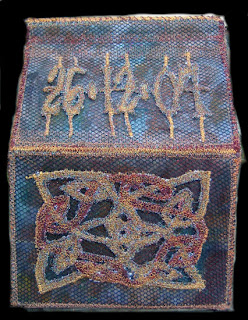 and the side which are both the same 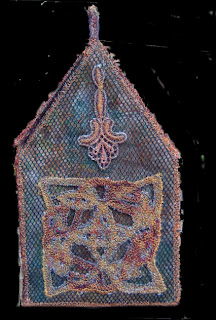 I completely forgot to photograph it after I had put the feet on it, I'll have to go visit and do it at some later date. The body of the box is made up of a sandwich of velvet(inside), pelmet vilene, cloth which was painted, stitched and foiled, a layer of printed chiffon(of an old skirt) stitched with metallic threads, a layer of black net veiling, and then the stitched panels on top.
I am happy to report that he liked it.
Posted by Pat at 3:02 pm

Congratulations, to you new "toy" - a good sewingmachine is always a good presetn!
and I think your children like your presents for theme! Both is wonderful!

Both the hussif and the box are really great. Wonderful gifts.

Wow Pat! I love your Son's box - he must have been bowled over and speechless. I also love your daughter's hussiff - how pretty and girlie - I bet she was equally bowled over. Congrats. on your new sewing machine too. Val

Hi!
This is a fabulous piece. It is beautifully designed, marvelously stitched, and skillfully constructed. Your son must be very, very proud to own it.

Congratulations on the new sewing machine too. All around, this was obviously a great holiday in your house and family.
Susan
PS I remember that reliquary in the V&A. Indeed a gorgeous work from which to draw inspiration.