...sort of. It's been a strange, not to say expensive, week. My computer is sort of fixed, still can't scan but at least I can get to my photo files. So fingers crossed....

Here in the UK it is the longest day today, nearly half way through the year and the nights will start drawing in. My son thinks it's very funny when I say this and it is silly because this is really only the start of summer but the it is also the silly season. I saw a definition that it was because Parliament was closed but I don't really think that would make that much difference!!!!

Augusten Burroughs
"I myself am made entirely of flaws, stitched together with good intentions." This was a timely entry on the Quotes of the Day blog One of the things that has come out of this week is a promise to myself to make a real effort to stop saying "I must do....xxxx......tomorrow, soon, next week e.g. back up my computer!!!!! But not only that but important things like contacting friends, it is too easy to let the weeks slide by.

And now to last weeks TAST, French knots. I love French Knots, there is something very satisfying to me in making them. So in keeping with the silly season and summer here is an ice cream dotted with hundreds and thousands (can you still buy them?) Oops I spilt some... 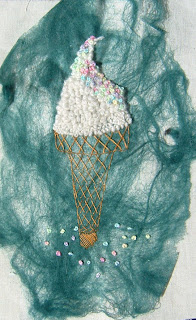 I would have preferred to scan this for better definition but it will have to do for now.

This is one I did sometime ago, a representation of a pebbley stream. 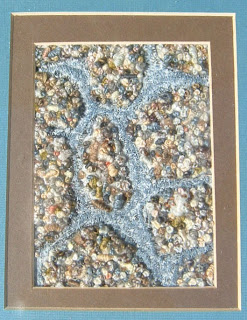 So now for long and short stitch.....she said enthousiastically, it is a stitch that I love when other people do it but I am never satisfied when I try it, I think you realise by now that I am not awfully good at neat!!!
Posted by Pat at 12:37 pm