no not the weather (is winter ever going to end?) but the exhibition at the British Museum. I have been looking forward to it for some time and I was not disappointed.   I loved the animal carvings and was interested how many examples of female carvings there were.   Many objects were so tiny it is a wonder that they have been found. Photography was not allowed, as you would expect, so I have made my own cave painting. 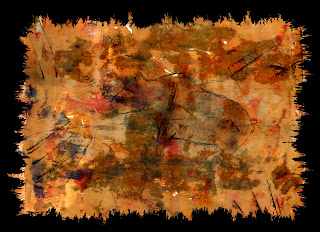 Gelli background, my attempt at the bison and a digital frame.  There are pictures of some of the objects here
The thing that really caught me was a little disc (it would fit in your palm)  with a hole in the middle.  One side was carved with a cow and on the other a calf.  Apparently the heads are so precisely positioned that if the disc is spun on a string the cald appears to "grow up".  So they had moving images 22,000 years ago.  I couldn't take in anymore after I had this in my mind so I will have to go back to do the latter end of the objects..