Near the end of the day at Kentwell (see below) we saw a bent figure shambling along the grass, as we watched the figure sat down with all the signs of fatigue. 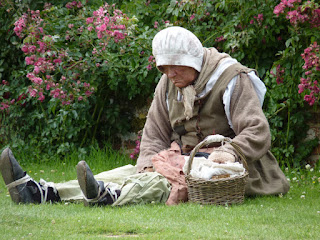 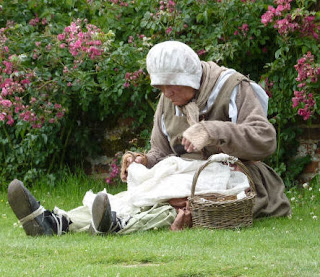 She then began to pick at the cloth until she had hold of one thread which she painstakingly loosened and then withdrew it, so careful not to snap it. 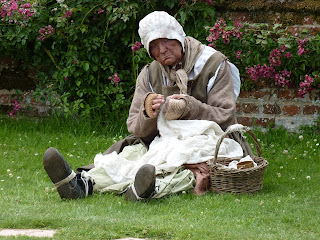 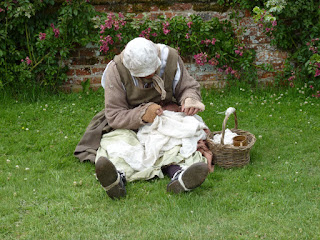 Then she wound the thread  round the handle of the basket. 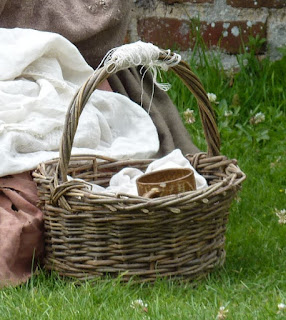 As I stepped forward to speak to her someone who I imagined to be some sort of  upper servant stopped me and told me to have a care but I asked anyway.  The old lady told me she picked the threads and hoped that someone would exchange the for some bread as she was very hungry.
I know it was all role play but  for a moment time was blurred, this meeting touched me deeply. It depicted the hardships of our ancestors but there are people still in the world who have to pick rags. How fortunate are we?
Posted by Pat at 8:35 am

Email ThisBlogThis!Share to TwitterShare to FacebookShare to Pinterest
Labels: Kentwell

Hello Pat,
What a wonderful visit you had. I have been to Kentwell,
It is so atmospheric. It is a great reminder of how things used to be. in some countries I have visited there are still Rag Collectors, sadly to say.
Your photos are wonderful thank you for sharing your visit.
best wishes,
Jane C

This sort of encounter always makes you count your blessings. I Love to read about times gone by but would not want to have lived then. wonderful pics. Judie

There I was in a past life, undoubtedly.