..second challenge Q&L  prompt from the Craft Barn.,   I thought of "Give'em the Old Razzle Dazzle"  from "Chicago" but who remembers this gem.

Ah, those were the days!
But the song that stuck in my mind was "I loved you one in silence" from "Camelot".  I saw the original production of this at Drury Lane. It was a beautiful production and years later I drew heavily on my memories when I was wardrobe mistress for our amateur production.  I can't remember how many cloaks I made and working out which bit of armour went where.
But I digress, my first thoughts were to do something medieval and romantic but my lack of artistic skills prevented that and then I had a very silly thought.
I thought of the wonderfully ridiculous shoes which are about at the moment.  I would love to own a pair but I at my age I know the pain they would cause.My slippers is where I'm at. So it remains an unrequited love affair.   Tenuous I know but if did let me make this dazzling shoe. 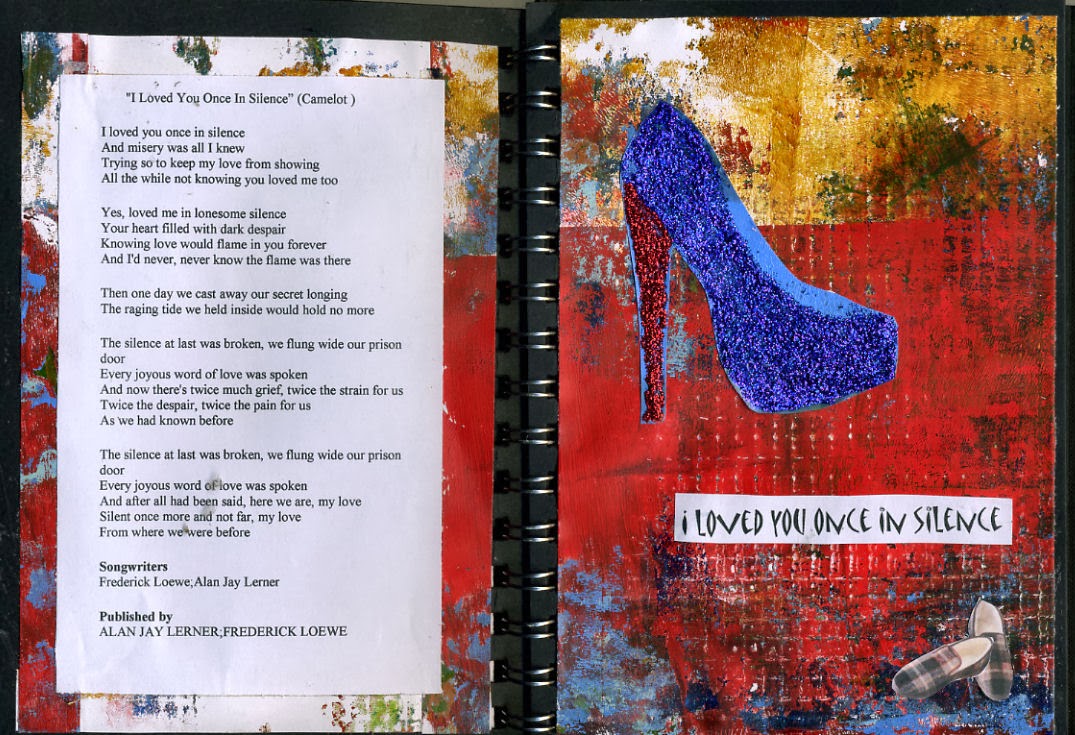 If you don't know the song this is Julie Andrews's vesion. Audio only.

Oh I'm lusting after that shoe. What a wonderful song to pick - I love the old musicals.

Beautiful page with dazzle shoes love the colour.....oh if only...
I had forgotten the song by Bill Hailey until I played it, but the Julie Andrews song is new, can't stop humming Razzle Dazzle now!
MaggieH

What a fabulous shoe, wish I could wear something that outrageous, still we have our memories of miniskirts and Mary Quant eye make up don't we :-)

Your shoe is lovely but your background is scrummier!

Your background is beautifully layered and the shoe is fantastic...I'd love to have a pair like this!

Can't say I remember the song but I love your dazzling shoe!

Visiting from The Craft Barn - I'm with you on the slippers and the 'wish' for the awesomness of those very dazzling shoes. Excellent choices :o)

Kiwi in Timbertown.
Love the shoes, and the background layers are great

I'm still only in my thirties but can't wear those shoes either because of health(read back)problems. But in fact nobody should wear shoes with that high a heels. I like your background a lot, and of coarse the sparkling shoes.